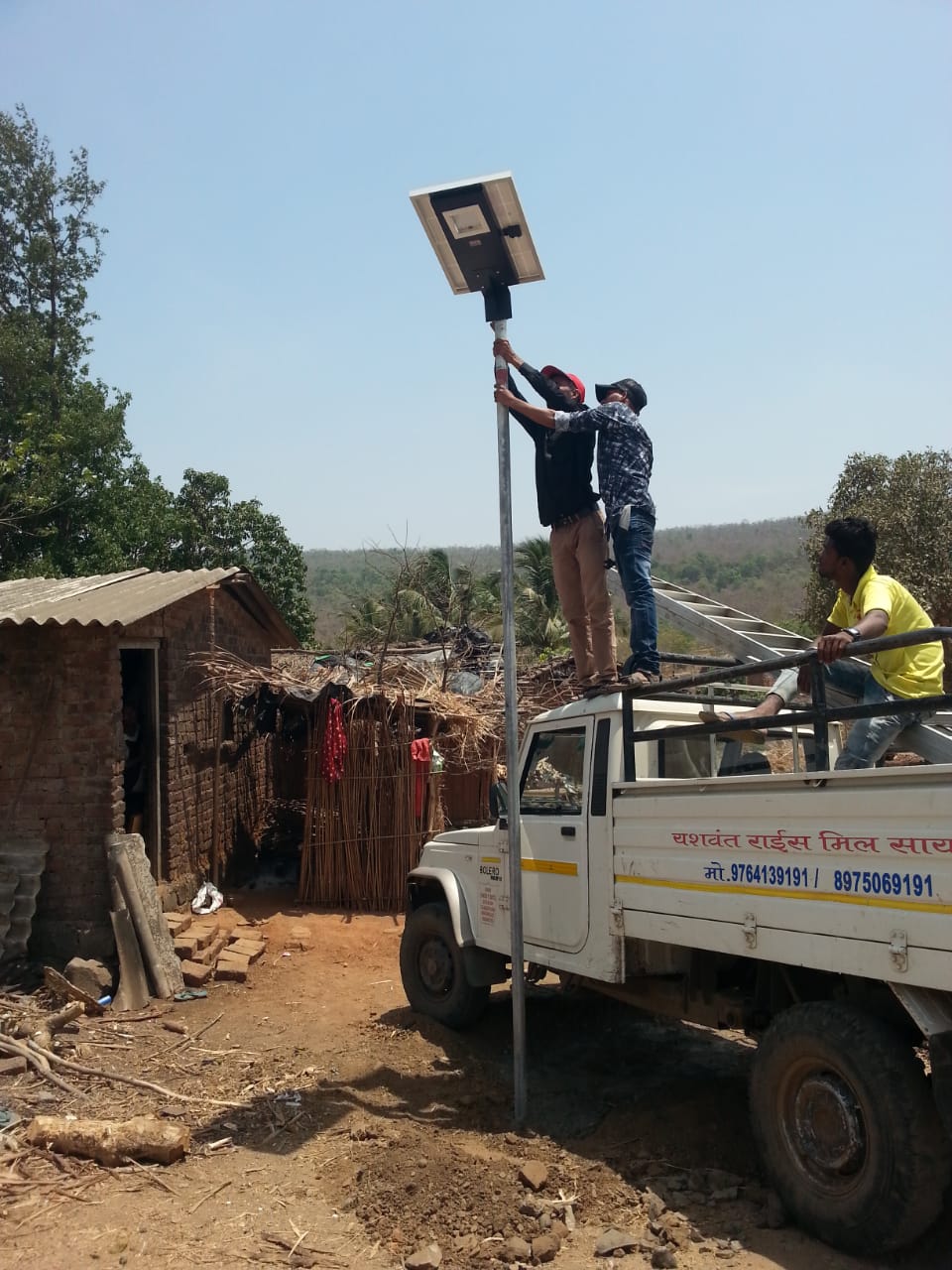 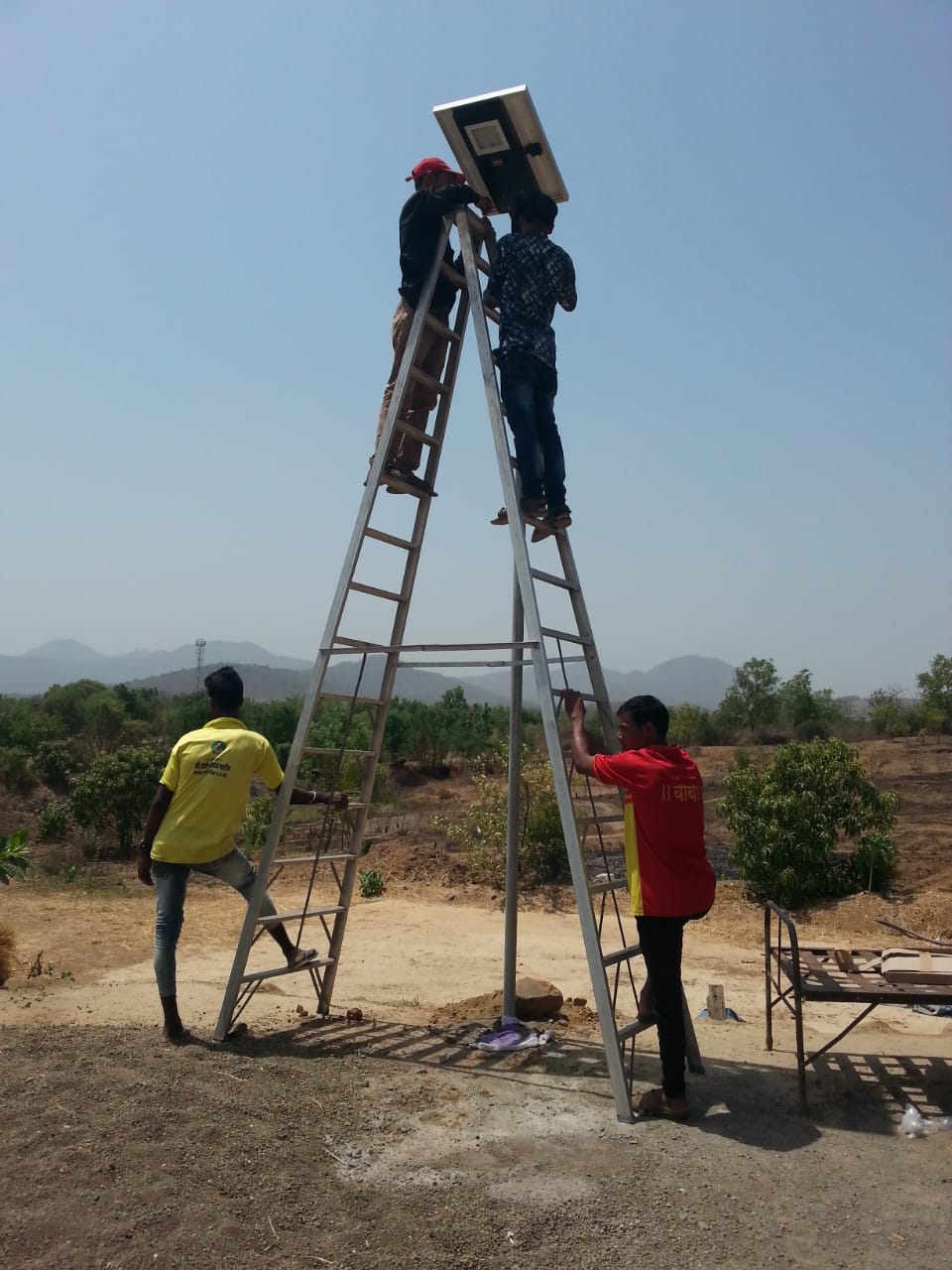 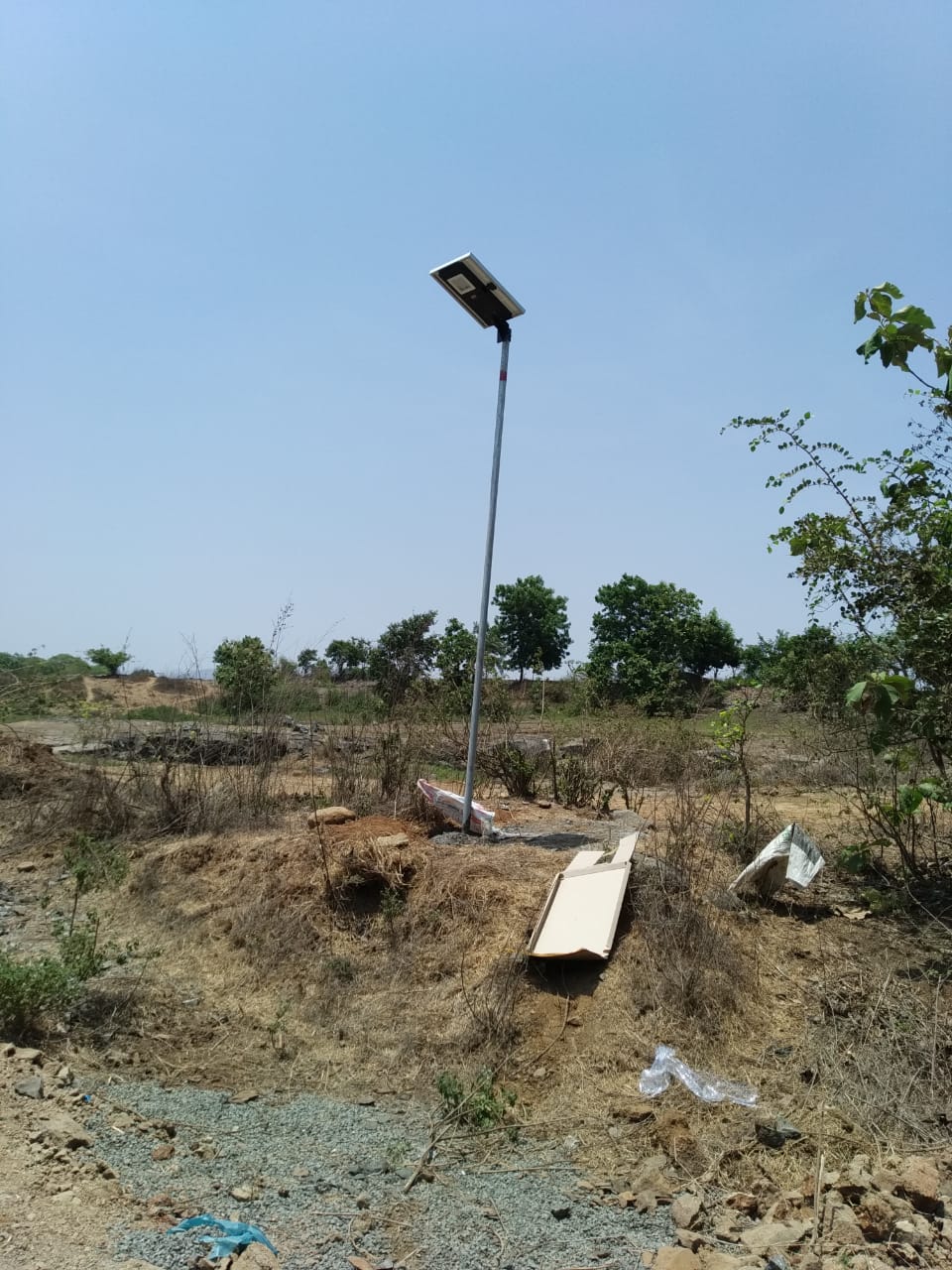 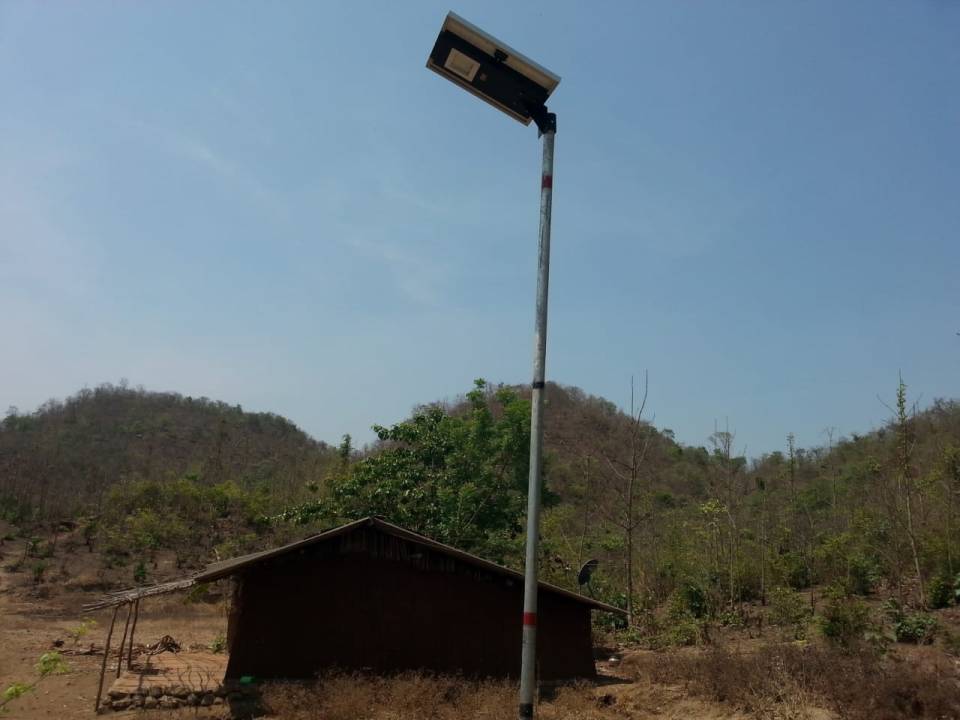 Have you stopped and wondered how come a home /office gets burnt completely due to short-circuit, when it already had short-circuit protection installed?

But wait…  Fluctuations don’t happen in metropolitan cities, do they.  Yes they do. 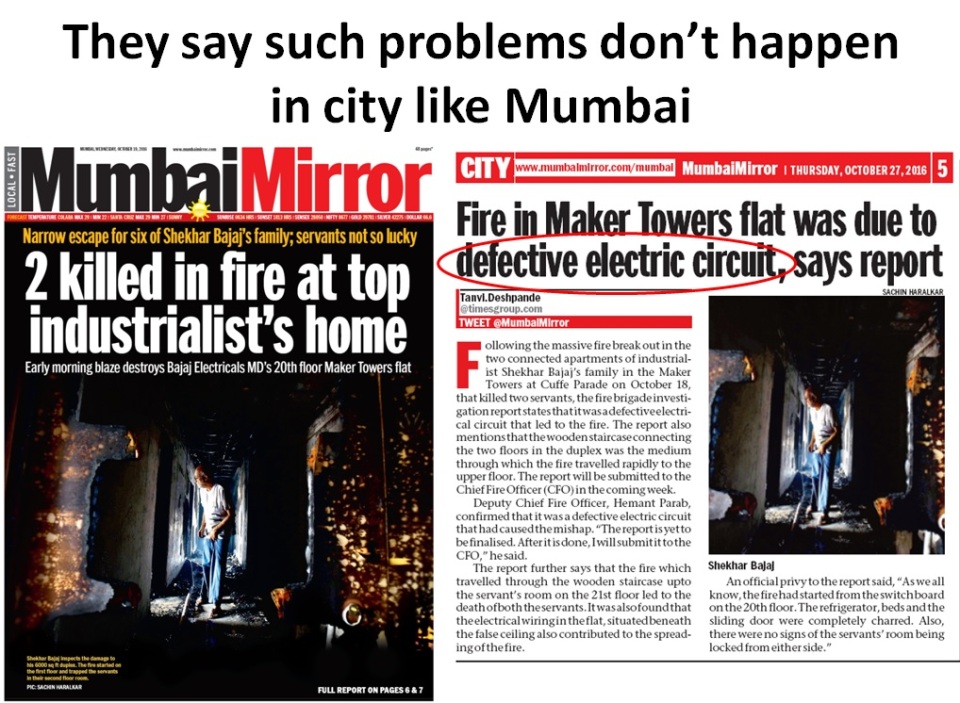 If you have read this above article in newspaper,  short-circuit protection was already installed yet it caught fire.

The main reason is that sparks/fire caused before short-circuit result in fires.

Whenever a building/ premise is designed , all safety factors are considered from worst case point of view, except for voltage . Voltage is left to equipments capacity to handle over voltage.

There are fires caused by incidents like neutral open and double phasing incidents, for which there is no formidable solution. The incident occurs very rarely however when it does it causes huge financial losses due to damages to critical equipments 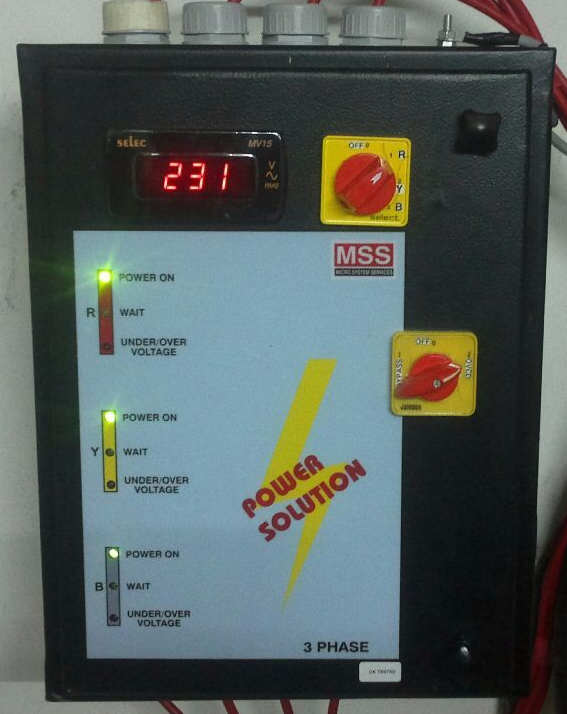 Equipower™ is comprehensive power protection device which acts as an insurance against power fluctuation that could damage your electrical appliances and electronic devices used in your homes and offices .

Equipower™ protects your electrical appliances and electronic devices against high voltage, low voltage, surges, spikes.  However what sets it apart from other protection devices is the ability to protect your equipment in case of neutral open condition. It can easily protect your equipment from voltage as high as 440V in single phase. Equipower™  increases longevity of equipments and minimizes the risk of damage.

Find out Capacity of Equipower suitable for your home/ office

Interested to know more about Equipower? Fill up the form below.

The year was 1997 , when Tata liebert engineers visited us at an exhibition at world trade centre. They were looking for something that could protect their online UPS in harsh Indian conditions. Their attempts to use stabilizer has not resulted good results. The UPS was high frequency technology relatively new at that time and Tata leibert had ushered it to India from Chinese OEM in hopes to revolutionise the UPS industry with sleek models. The UPS was was more efficient in conversion of power as it had no transformer in it. All of this work was done with help of passive components.

However little did they know that they were in for a nasty surprise. the tolerance of these UPS was about 20% where as voltage fluctuations in India is more than 35%. At times trees would fall on overhead wire causing damage. Weak neutral or disconnection of neutral due to irregularities in distribution was very common. All this contributed to defect ratio of more than 26%. which would mean that 1 out of 4 UPS would come back for repair. This is bad statistic for any product. They were on verge of discontinuing the product line as it seriously dented the image of then no.2  company in online UPS.

This model was designed originally for TATA liebert.

After use of OVCD, their defect ratio went down from 26% to 6% which was a huge improvement. hence they decided to make it standard product for each UPS that would be sold in India.

Many of distributors till date don’t know the exact use of OVCD, except for reason that it is supplied along with UPS and that it was mandatory to install it if they hoped for free servicing under warranty.

Why should you consider using OVCD before your equipment?

1.No problems due to voltage fluctuation.
2.Zero downtime
3.Your equipment becomes more rugged
4.Less service calls = Increased profitability + Increased credibility.
5.Better perception of quality of your system in the minds of the customers
6.Increases the chances of repeat sales or referral sales.

Now you can install your equipment in the worst electrical conditions without being bothered about service calls.

We are looking for appointing dealers across India. If you are interested please drop us a email at info@microystemservices.com

Can Equipower replace a stabilizer?

In this video we are discussing if Equipower can replace a stabilizer.

Answer is yes and no.

Watch the complete video to find out.

In this video we are discussing the unaddressed issue of double phasing caused by trees falling on overhead wires.

This can damage your solar inverter.  You will need to safeguard it in case of accidental problems just like short-circuit or lightning.

In this video we talk about a possible problem caused by two over head wires touching each other because of trees and causing damage and how contemporary solutions like stabilizers and SPD will not be able mitigate the problem.

If you have faced similar issues and want solution for it please give us your details in form below:

Or you could also visit our online store to range of products we offer.

The need for 400V protection in every premise

Whenever a building is designed all safety factors are taken in consideration. From electrical installations point of view safety factors to be considered are

All of the above considerations are from worst case Scenario basis. All of the above factors, if not taken care of, can lead to #fires and loss of property and assets. there are also chances are of human tragedy.

Shortcircuit is normally taken care in all premises. Lightning protection is generally employed for high rise buildings . Both of these factors are from worst case scenario.

however voltage protection becomes the most neglected part. the worst case scenario in voltage is 440V in single phase and it can be caused by 2 reasons primarily

There is actually no safeguard designed to take care of this situation. We depend on our equipments to handle the overvoltage scenario. many equipment can handle this problem for short period of time only. Most electrical contractors consultants and architects do not offer a robust solution for such issues.

#MSS offers solution focusing on this very aspect of electrical problems. For details get in touch with us on queries@microsystemservices.com

Generally any equipment will get damaged due to 3 primary reasons.

First 2 reasons are taken care of in design and considered as per worst case scenario.

However safeguards for temporary over voltage are generally not taken, certainly not considered as per worst case scenario.

In secondary side of LT transformer , worst case scenario is 440V in single phase.

It happens more often than expected.

Reasons for 440V coming in your supply 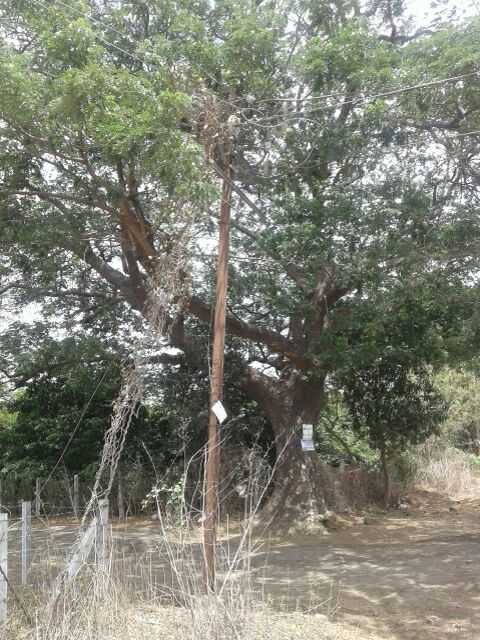 Majority of projects are located outside of city limits due to roof space constraints and industry requirements. Such scenarios are very common

Not one of the available solar inverter can handle a continuous over voltage of the above nature and will get damaged resulting in down time.

There is strong need of safeguard against such issue in design stage itself so that such issues can be tackled with min losses.

To illustrate, if there is short circuit or lighting strike, the system is designed to handle it. However for continuous over voltage there is not a single solution that can be offered.

There is infact no solution incorporated for 440V in single phase. Most of integrators rely on the inverters capacity of handling voltage fluctuation, and they will definitely get damaged in such a situation.

This is where it is recommended to take cognizance of potential problem that can be taken care in design stage itself.

We specialise in this area i.e. Neutral open and double phasing protection.

You can see our website www.microsystemservices.com for details on how we can add value to solar field.

Did your LED light get damaged? 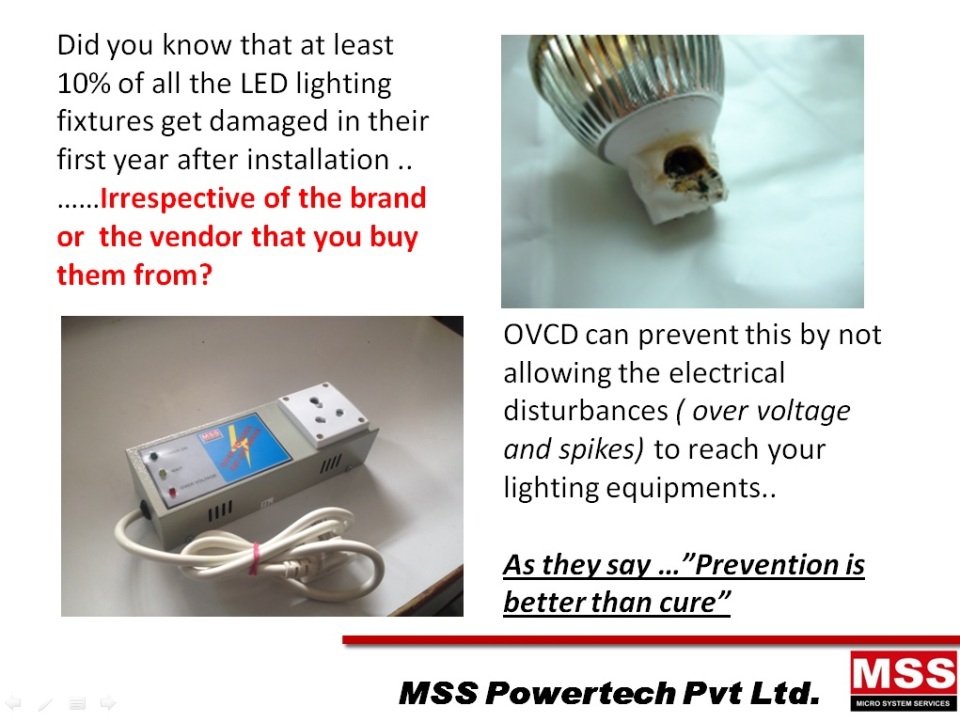 Are inverter based equipment sturdy enough for Indian conditions?

Our appliances are getting smarter by the day. Its a good thing that many companies are  energy conscious and are making their appliance even more energy efficient. In India most of home appliance are now made compulsory to have 5 star energy ratings, especially cooling appliances like ACs , refrigerators.

The TV ads are now flooded with ads talking about inverter based ACs, refrigerators. This is great news for energy conservation. However there is rider to all this. These units are susceptible to damages because of power fluctuations.

A traditional circuit consisted of a step down transformer which converted 230V AC to 24V AC which was then fed to bridge rectifier. The rectifier then converted the AC to DC and then it was distributed to the internal circuits with regulator and other component. Even if the voltage increased dramatically the secondary side would experience a relatively low surge on voltage. Prolonged exposure to voltages might have caused damages to internal circuits. In short these circuits were relatively very sturdy in voltage fluctuations.

However transformer has losses. It dissipates a lot of energy in the form of heat. Even in best cases the efficiency possibly didn’t not go beyond 87%, which was problem. Transfomer is bulky.  Higher powered (kVA) machines would require a bigger transformer and as result were heavy too.

What we call inverter technology today , consist of PWM inverters and SMPS based circuits, may be even more advanced.  These units have done away with conventional transformer based circuit and in effect increased the efficiency. They are also light weight , very compact and dissipate less energy as heat. They also come in attractive housings

However the flip side is that these circuits are now directly exposed to raw power. This is where the new problems have come up. These circuits are having 20% tolerance to voltage fluctuations. This would mean 180V on lower side and 280V on higher side. Seems ok doesn’t it? Wrong!!!

In developing and underdeveloped countries the power conditions are not so good and voltage frequently goes beyond 350V. This is a curse for these inverter based appliances, which get damaged more frequently than their predecessors.

These circuits are not inherently designed for such conditions and since units are manufactured considering global markets which include EU and US. Many white goods brands have made their foray in a new market only to have marred their reputation by service issues. We have many brands making their disappearing act after blitzkrieg of sales and ads.

One can attribute a serious contribution of such factors on making and breaking of brand in Indian conditions. There is probably two options here, either improve the tolerance of the internal circuits or protect the units externally by use of some protection equipment.

Do let us know what you think. 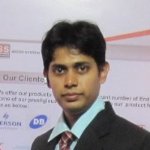